About One Lonely Barrel

Producing and sourcing great quality wine and providing it to our passionate wine lovers at exceptional value.

One Lonely Barrel is about producing and sourcing good quality wines and providing it to passionate wine lovers at Exceptional Value!!

The passion of the One Lonely Barrel label is about making the best wines possible by procuring the best fruit, handpicking the grapes, nurturing and handcrafting the wines from the vineyard to the bottle. These are marketed as the Personally Crafted Shiraz range.

Additionally, during the process of procuring grapes from some of the most established vineyards in the Barossa valley, limited quantities of good quality wines are discovered in wine vats, cancelled vats, bin ends and cleanskins, that show the promise of further development, and at the same time represent extremely good value for money.

These wines are personally tasted, selected and purchased in small quantities (2-3 barrels), and then marketed as The Chosen One range to One Lonely Barrel Club members at prices that are up to or beyond 50% less than what would otherwise be paid for the same wines under their own label. 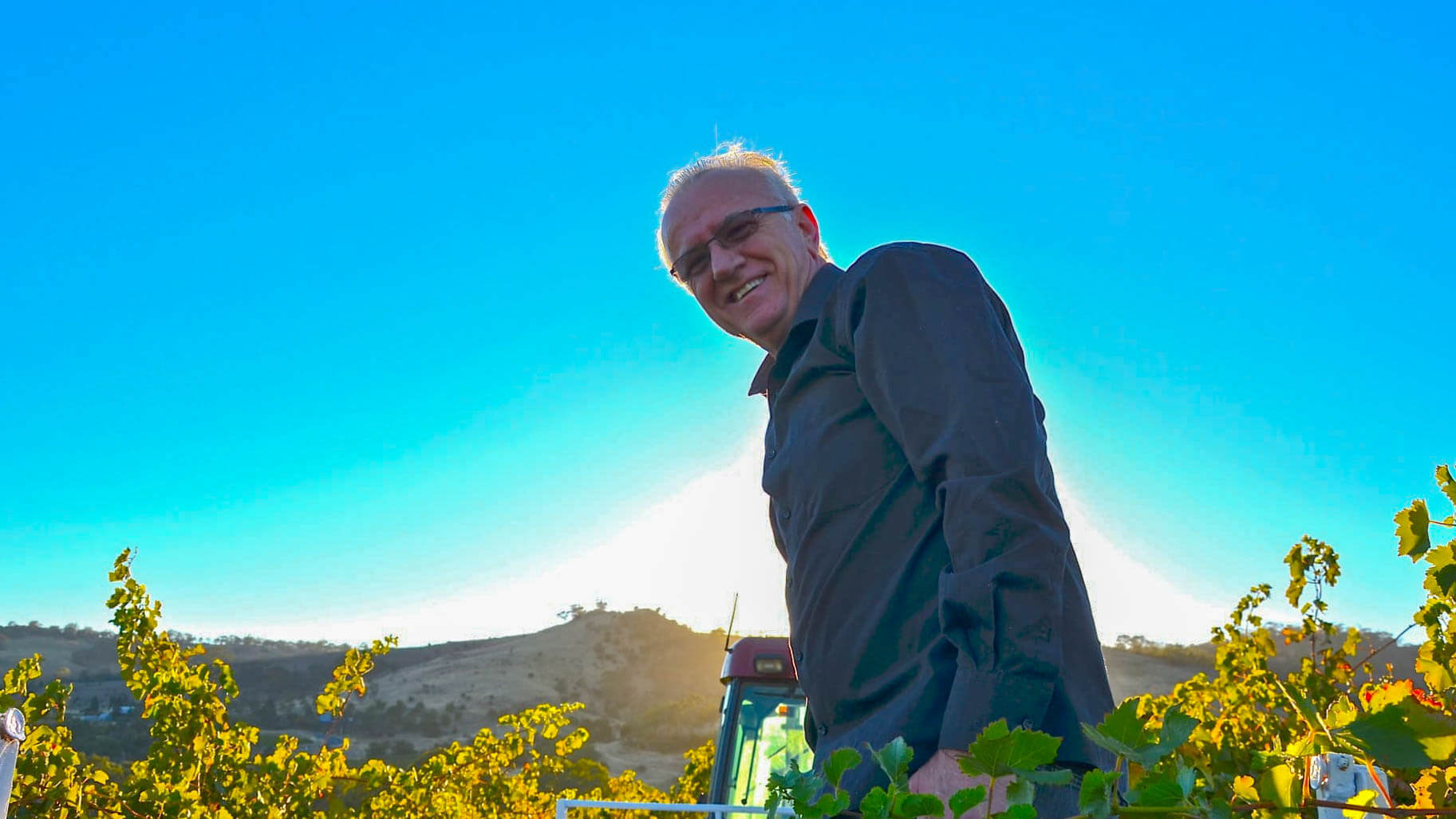 The One Lonely Barrel journey into winemaking began in 2002. John's first barrel was a disaster! He's quoted as saying he "made the first Coca-Cola flavoured red wine". Needless to say, it was not terribly good, and the story is too long to tell here, so please reach out to John if you want to hear more!

Many long hours of research and consultation with friends and associates seemed to always lead back to the same piece of wisdom: ‘To make a good wine, find a good grape’.

Along with food and wine, music is one of John's other great passions. Unfortunately, he's tone-deaf, and the rest of his family doesn't quite appreciate a music library underpinned by full collections of works by Bob Dylan, Van Morrison, Neil Young and Jethro Tull to name a few. As such, John's wine labels from The Beginning to 2010 were dedicated to a number of his favourite albums covers from these artists.

The undertaking of winemaking courses and the delving into volumes of winemaking literature, along with the continual support of a handful of close friends who believed in the journey, made the 2003 vintage of Barossa Shiraz quite the success.

This vintage was made from handpicked grapes and matured in the titular one lonely barrel for twelve months to be shared with family and friends. It was this participation in the winemaking experience of those who were closest that inspired the One Lonely Barrel motto: ‘It’s all about Sharing’.

2004 saw One Lonely Barrel experiment further in the pursuit of producing the best possible wine. Use of a borrowed "home made" wine crusher to separate the fruit from the stem, whilst aimed at removing unnecessary debris and providing a cleaner crush, in reality resulted in badly macerated fruit, extreme amounts of tannin, and suspected oils from the seeds contaminating the wine.

This vintage is still being sampled each year in the hope that the tannins may soften to an acceptable level. However, to date, this wine has not improved and has not been shared.

I then purchased my own more gentle, professional crusher.

This excellent vintage won Best in Class on the day at the 2005 Tanunda Show.

The 2006 vintage proved to be exceptional, and won both Best in Class on the day, as well as Best Wine trophy at the 2006 Tanunda Show.

While the Jethro Tull silhouette was the home made label until 2007, 2008 2008 saw Blood on the Track by Bob Dylan used and in 2009 Van Morrison had his chance with Astral Weeks.

This vintage was proudly dedicated to the winemaker’s two grandchildren, who were born in that same year. For the first time, separate barrels of Shiraz and Cabernet Sauvignon were produced, with the intention of individually labelling each wine variety for one of the grandchildren.

When the wines were tasted, however, blending the wines was considered, and so the limited Cabernet Shiraz, adorned with a label featuring both grandchildren, was produced. This wine is reserved for special occasions and is definitely one that we love to share.

The Birth of 'One Lonely Barrel'

With the sight of a single barrel tucked away in the corner of a garage, it re-ignited a passion that evolved into an ongoing challenge to produce wines that improved with every vintage.

The 2011 wine features the very first ‘Personally Produced’ label, marking a significant milestone in the One Lonely Barrel journey. Moving forward, One Lonely Barrel would begin to take on a more commercial standing in regard to production process and image.

This year saw the first vintage entered into London's International Wine Competition (IWC) win a silver medal, and a bronze medal at the Melbourne Shiraz Challenge.

This immediately provided even greater inspiration to continue making the best quality wine possible, relative to the seasonal variance year on year.

As with the 2012 Shiraz, One Lonely Barrel’s 2013 wine won medals at the International Wine Show in London. On this occasion, though, it went one better by winning two silver medals, in what was widely thought in the industry to be the best winemaking year for a decade. This wine is considered to be the best of the three ‘Over The Creek’ vintages of 2012 – 2014.
The 2014 wine garnered a bronze medal at the London International Wine Show and was the last vintage of the ‘Over The Creek’ trilogy. Although not as bold as the 2013 Shiraz, the fact that only a few cases remain indicates that, unlike others of a similar age in bottle shops, it is now drinking extremely well for a four year old wine.

'Back to where it started'

Due to vines ‘Over The Creek’ experiencing adverse climatic conditions during this vintage, 2015 provided an opportunity to source fruit from 80+ year old vines that were located in the original One Lonely Barrel ‘Old Vine’ vineyard, close to the original 'Homestead', that produced the Trophy Winning 2006 Shiraz. Limited quantities of this wine is still available.

This second ‘Old Vine’ Shiraz vintage has developed into a well-balanced, rich, dark and fruit-flavoured, yet elegant wine, making it ready to enjoy now and with great potential for longer term ageing.
The 2017 will mark the third vintage from ‘The Homestead’ vineyard. It is currently still in barrel, with a potential release date of mid-2019. The 2018 ‘Old Vine’ is also in barrel and may be released at some time in 2020.

I began my journey into winemaking in 2002. My first barrel was a disaster!

I made the first Coca-Cola flavoured red wine. Needless to say, it was not terribly good, and the story is too long to tell here; maybe later.

I then went looking for the 'instruction manual', as we all eventually do, and after a few hours of browsing the internet, I found a website that caught my eye. The homepage read: "to make a good wine, find a good grape".

This has proven to be great advice.

After attending a number of winemaking courses, reading a few books, and with a little help from a handful of friends, the 2003 vintage turned out to be quite a success. It was a delicious Barossa Shiraz, handpicked and matured in a 300 litre , French Oak barrel for 12 months that was shared with family and friends. I’ve always believed that wine tastes better when shared with others. Don't you agree? Hence the One Lonely Barrel slogan: "It's all about sharing!"

After coming back from my friend's winery, and having seen hundreds of barrels in storage stacked four and five barrels high, I noticed my 'one lonely barrel' tucked away in the corner of my garage. It looked very 'lonely' indeed! That moment provided the inspiration for the naming of One Lonely Barrel.

Since winning that competition, family, friends and colleagues have continued to provide very positive feedback in regard to the taste and quality of the wine that I was making. It is a wine that can be enjoyed very soon after bottling, and that becomes quite exceptional drinking after it is laid down for a few years.

Along with food and wine, music is one of my other great passions. Unfortunately, I’m tone-deaf, and the rest of my family does not appreciate a music library which is underpinned by full collections of works by Bob Dylan, Van Morrison, Neil Young and Jethro Tull. As such, my wine labels to 2010 were dedicated to a number of my favourite albums covers from these artists.

The 2010 vintage is proudly dedicated to two of our grandchildren who were born in the same year. I produced two barrels of the 2010 vintage; a barrel of Shiraz as usual, and a barrel of Cabernet Sauvignon for the very first time. My intention was to individually label the wines, dedicating them to each of our grandchildren. However, upon tasting the wines just prior to bottling, it was agreed that a blend of the two made for an overall better wine. So, in the end, both grandchildren adorn the 2010 Cabernet Shiraz, which is only for sharing, and not for sale.

Following my retirement from forty years of retailing in 2011, and with strong support from family and friends, I resolved to treat One Lonely Barrel more as the commercial undertaking that it deserved to be, rather than the past-time it had been. In doing so, I entered my first commercial vintage of 2012 One Lonely Barrel Barossa Shiraz in the 2013 London international Wine Challenge. Amongst eight thousand wines from across the globe, it won a first silver medal for One Lonely Barrel. This initial commercial success was followed by a further six medals from the next three vintages.

Now, three successful vintages and six years later, the 2016 One Lonely Barrel Old Vine Barossa Shiraz is ready for release. The month of May will see the release of the 2017 vintage, whilst the 2018 vintage remains in barrel until early 2020.

Another exciting development for 2019 at One Lonely Barrel will be the introduction of ‘Chosen With Care’ wines under our secondary label, ‘The Chosen One’. This label will represent wonderful wine at exceptionally good value. If you’d like to be the first to receive the latest ‘Chosen With Care’ information and offers, become a One Lonely Barrel Club member by subscribing here.

So, whether it’s our One Lonely Barrel Barossa Shiraz, or our The Chosen One, it's all about sharing